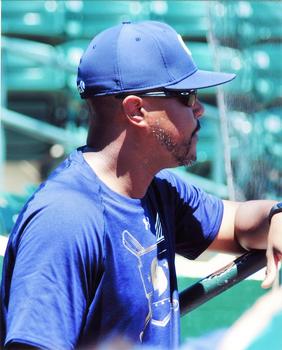 ​​ Kraig is the Arena Manager at Backyard University.  Kraig, a native of Baltimore, Maryland, graduated from the Boys’ Latin School of Maryland where he was a four-year varsity player.   As captain of the varsity team, he helped lead the Lakers to the 1993 MIAA Baseball Championship.  He received his bachelor’s degree from Clemson University, where he was a walk-on outfielder.  At Clemson, he met fellow Backyard instructor Matt Padgett.  Kraig served as a summer camp baseball coach for former Baltimore Orioles player and bullpen coach, the late Elrod Hendricks. Two of Kraig’s great uncles play professional baseball in the Negro Leagues:  Tom Love (Newark Eagles) and William Davis (Kansas City Monarchs).  Kraig is a member of the Dallastown High School baseball staff where he works with junior varsity players.  In 2018 the team posted an 18-2 record, and 16-3 in 2019.  He was named Head JV Coach for the 2020 season.  Kraig provides individual hitting instruction and defensive coaching for infielders and outfielders.