PRIVATE SESSIONS IN HITTING, PITCHING, FIELDING, CATCHING AND MUCH MORE! 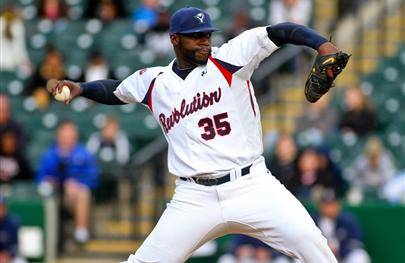 Corey Thurman has spent nearly half his life playing baseball professionally, and has reached the top.  Thurman is a 13-year veteran of professional baseball, which includes parts of two seasons in the Major Leagues with Toronto Blue Jays.  Thurman appeared in 49 games for Toronto between 2002 and 2003.  He spent the entire season with the York Revolution, making a team high 29 starts, throwing a team high 165.1 innings.  Thurman finished the season tied for fourth in the Atlantic League in strikeouts with 129.

Corey Thurman will forever carry the distinction of being the first Revolution player to be honored with a league monthly award, after being named Atlantic League Pitcher of the Month for June 2008.

In the month, Thurman was 4-0 in six starts and 38.1 innings pitched.  He allowed just seven earned runs in June, for a microscopic ERA of 1.65.  He also struck out 30 batters while walking just nine in those six starts.  In the two of the outings, June 6 at Camden and June 12 versus Somerset, he allowed no runs in seven innings of work.

Born in Augusta, Georgia, Thurman first signed with the Kansas City Royals out of high school in Texarkana, Texas after being selected in the fourth round of the 1996 amateur draft.  He would make his professional debut later that summer at the age of 17.  In addition to his Major League experience with Toronto, he's also spent time in the St. Louis Cardinals, Montreal Expos and Milwaukee Brewers organizations.